For a week now we have been following the white and red signs which guide us along the Phrygian Way; we are hiking in the Phrygian Valley, a triangular area stretching between the cities of Eskisehir, Kutahya and Afyon, not far from Ankara, in the heart of the Anatolian peninsula.

The guide books dedicate only a few lines to the region, mentioning the site of Yazilikaya, the mythical home of King Midas. Actually there is much more to discover here and a hike on the Phrygian Way, recently marked by the eager Turkish hiker and photographer Huseyin Sari, is a journey back in time.

This area is far from the main tourist routes, the hamlets and villages we reach are untouched by progress, peasants and shepherds still live in the same way as their progenitors.

When it comes to eating, there is no alternative to the tasty local cuisine, and the women of the village never deny us a taste of home made cheese, yogurt and milk. Honey, jam, bread, and vegetables are all locally produced. Sometimes we camp out in the main square of the village becoming the main attraction, so all the people come to greet us with big smiles, other times we may sleep on the floor, or in a wooden hut in the middle of a carefully tended lawn that seems out of place in the rural environment.

But what remains of the ancient Phrygians in these valleys that look a bit like Cappadocia, also mainly formed from compacted volcanic ash and molded into fantastic shapes, like pinnacled sand castles made by children on the beach?

Very little – it seems, because the traces of their presence are scattered over an area which is vast to explore on foot, but the search is rewarding indeed! The ruins are very impressive and the fact that they are almost unknown adds charm to their value. 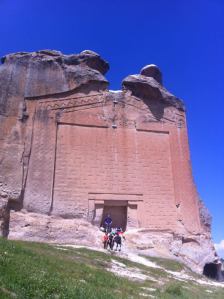 Walking by the majestic façade of the monument of Midas, over 2000 years old, still bearing its sharply carved geometric patterns, we try to imagine what may still be laying under the sand, the monument of Maltas; we gaze in awe at the imposing sculpted Aslantas tombs, now partially demolished, with a snake – only barely visible – and the head of a lion as big as a man now lying overturned on the grass.

We are almost overwhelmed by the emotions we feel as we roam around, all the more powerful because we are completely alone, the only visitors of this magical site.

Not to mention the many carved and pierced outcrops and caves that once housed entire communities of tens or hundreds of people – the monasteries and churches that once animated the life of these communities, such as Metropolis, now a sleepy village of a few hundred inhabitants, but perhaps once inhabited by thousands of people. 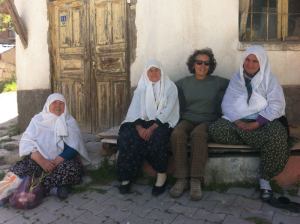 “But are we the first to get here?” I often asked the chief of the village hosting us, as he was going to be photographed with this group of “adventurers” who had come to his village on foot. “Well… there have been a few tourists, some scholars, archaeologists … but Italian… yes, you are the first!”

Now the challenge will be to hike and enjoy this path in a sustainable manner, without changing anything, trying to integrate visitors into the life of the local communities.

Someone has already thought about building new small hotels, most likely in cement, opening access roads and creating parking lots, but maybe this is not the right kind of approach in this area. 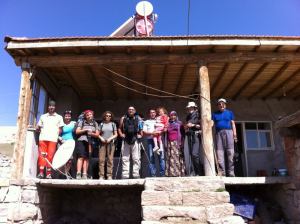 I hope instead that more and more residents will open their homes to hikers, offering sustainable, diffuse and low impact hospitality. There are also many beautiful old houses, built with local materials and harmoniously fitting in the landscape, that could be refurbished with little effort and used as guest houses.

A further step could be to involve and train some of the village people so they can start working as guides on the route, and maybe also offer luggage transport using pack animals which are still very common in the area.

This could benefit the local economy and provide a unique experience for active and conscious tourists looking for unusual paths and deep emotions.

To see photos of the route

To walk on this trail

The proposed route from Walden travel on foot